Race to Shenzen, a first-timer at Cluj. Who will reach the WTA Finals in 2021? 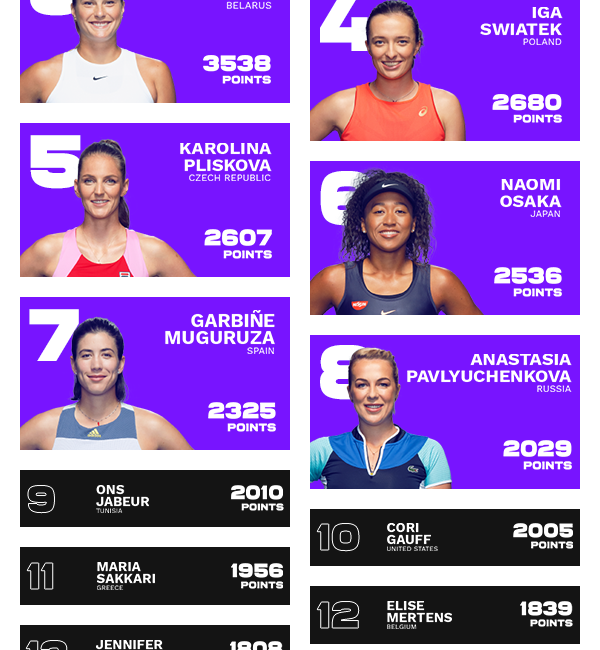 After becoming part of the WTA family, Winners Open is the 25th week of WTA`s Finals qualification process, Race to Shenzen, a tournament that brings the eight best players in the world.

Ash is followed by Barbora Krejcikova, this summer`s Roland Garros Champion. Krejcikova added to her Paris performance some other great results, winning on hard at Prague, which was her third title this season (her first came at Strasbourg, after defeating Sorana Cîrstea).

The third spot belongs to Aryna Sabalenka, the Belarus player who played in the semifinals at Wimbledon, won the title at Madrid (she won against Barty) and Abu Dhabi (against Kudermetova) could have her debut at WTA Finals.

The Polish-born Iga Swiatek is number 4 in the Race to Shenzen rankings. She won Roland Garros in 2020 and this season triumphed in Rome, Adelaide, and managed to reach the quarterfinals at RG.

The last four spots in the Race to Shenzen rankings belong at the moment to Karolina Pliskova (finalist at Wimbledon), Naomi Osaka (the AO champion), Garbine Muguruza (who has one title and two other finals played), and Anastasia Pavlyuchenkova (finalist at RG).

With many other tournaments left to be played and insignificant point differentials, the Race for Shenzen is still an open battle.

The Romanian players with the best ranking in the Race to Shenzen are Sorana Cîrstea (#28), Simona Halep (#40, due to her prolonged absence this season), and Elena Gabriela Ruse (#64).